Welcome to “Women of G FUEL,” an interview series where we shine a spotlight on the ladies of the #GSQUAD. This time we’ll be talking to Brittney Palmer.

As a model, an accomplished painter, and an Ultimate Fighting Championship Octagon Girl, Brittney Palmer is perhaps the most well-known female member of the #GSQUAD—at least outside the world of gaming. Her Instagram account boasts over a million followers, and her art has been exhibited all over the country, most recently in a solo exhibition as part of UFC’s International Fight Week 2019.

But despite these impressive plaudits, Brittney was warm and down-to-earth when we spoke, clearly at ease switching back and forth between discussing her childhood and describing the private helicopter ride over Whistler Mountain from which she had returned the day before. “I look at [fellow UFC ring girl] Arianny, and I’m like, ‘we’re the only two people in the world that can do what we’re doing right now,’” said Brittney. “We just did the fight, the thing—this is our moment. So I’m really grateful, and I feel very comfortable.” 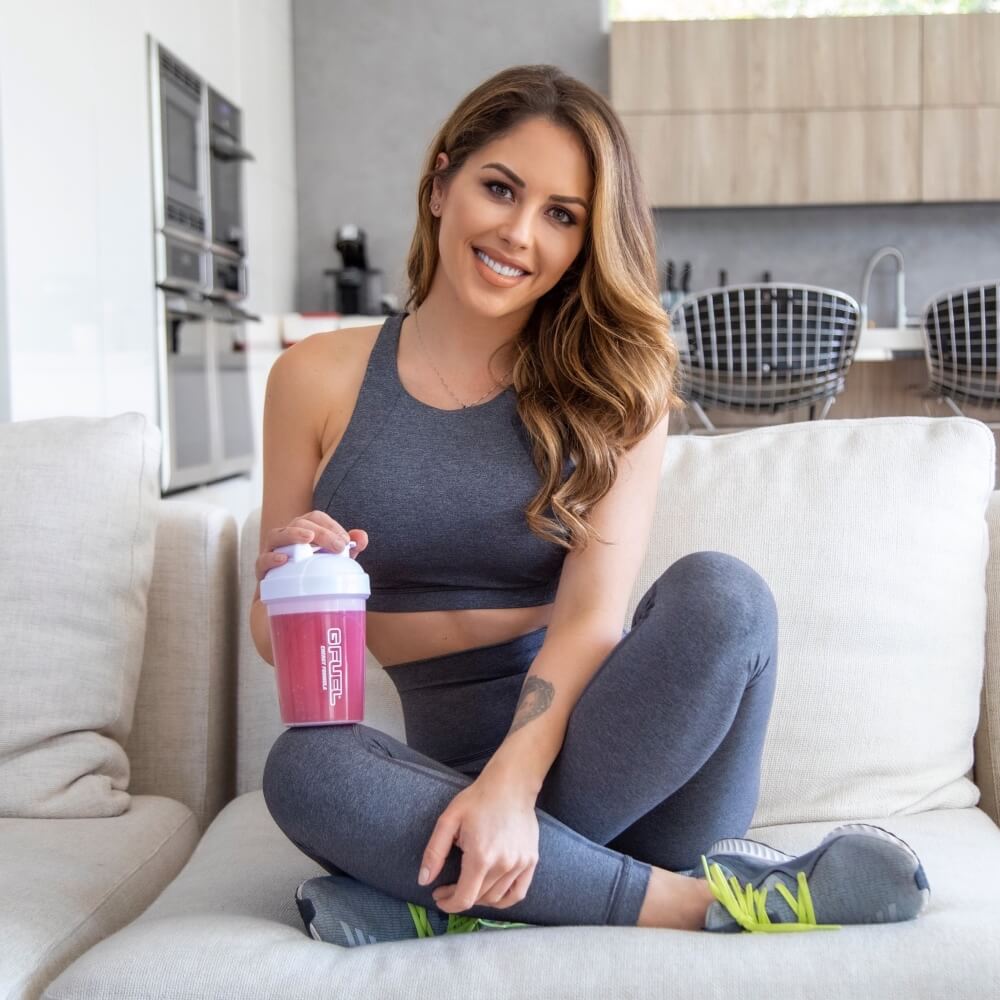 Things weren’t always so simple for Brittney. Born in San Diego, she moved to Las Vegas at a young age. Though Brittney was a diligent student—during her senior year, she was part of her high school’s varsity debate team—growing up in Sin City gave her an early look at the razzle-dazzle town in which she’d eventually forge her career. “We’d sneak away in high school and we’d go on the strip, like that’s what we’d do for fun,” said Brittney. “So it definitely was a little bit of a different upbringing.”

When Brittney was 16, her father passed away, leaving her mother to support Brittney and her three siblings single-handedly, first as a property manager, then as a loan officer. “My mom has always worked really hard, to this day,” said Brittney. “My family’s small, but we’re very close.”

After graduating from high school, Brittney started a job selling timeshares for Westgate Resorts, but soon found herself yearning for greener pastures. “In the month that I did the job, I couldn’t stand it. I sold literally like one or two, so I wasn’t very good at it,” said Brittney. “But outside, there were two showgirls, with big showgirl headdresses, and I was like, ‘what is that, I want to do that job.’”

Inspired, Brittney boldly approached the showgirls and asked them how they got their gig. They gave her their boss’s phone number, and after a call and interview, Brittney scored a position as a showgirl on the very same day. Soon enough, she set her eyes on another goal: getting a job as a professional dancer.

Unfortunately, Brittney had no formal dancing experience at the time. “So I would work,” said Brittney. By day, she worked for $15 an hour; by night, she attended dance classes. Eventually, she negotiated a deal with the dance school, teaching young children how to dance in exchange for free classes of her own. “I just worked seven days a week, just hustled at it so much. And finally, I was ready to become a dancer.”

After three years as a professional dancer, Brittney was forced to recalibrate her career once more after she was involved in a brutal car accident. “My car was T-boned and hit me on the driver’s side. I was driving and fractured my pelvis in three places.

“But I got something amazing out of it,” continued the California native. “I got the ability and the passion for art—and that is such a great gift. And I don’t think I would have found that if I didn’t have those months where I couldn’t move.”

Indeed, after years of non-stop career development, the solitude of Brittney’s recovery period led her to paint for the first time. She found that she was naturally skilled with the brush, and quickly “fell in love with art.”

After recovering from her injuries, Brittney auditioned for a position as a ring girl for the Ultimate Fighting Championship. Her lifelong interest in mixed martial arts shined through, and she soon got the job. But her interest in art persisted during this career change, and she soon moved to Los Angeles, taking time off from her UFC gig to enroll in art school.

Since then, Brittney has expanded her life and career to occupy many spheres: martial arts, painting, producing YouTube videos, and even gaming—the latter thanks to her relationship with G FUEL. “I love gaming. I love the art in it, as an artist. I wish I had more time for it… working with G FUEL, I’m able to stay connected to that, even though I’m not practicing,” said Brittney.

Brittney’s involvement in the gaming world transcends her status as an occasional player: she’s a video game character in her own right, thanks to an appearance as an Octagon Girl in UFC Undisputed 3. But though she was grateful for the opportunity—and looks back fondly at her experience doing motion capture with the development team—Brittney is ready for her character model to get an update. “I have seen myself [in the game]. It’s very weird, because I don’t think it looks like me,” said Brittney. “But it’s cool!”

By the end of our conversation, it was clear that Brittney’s successes as an artist and ring girl are the result of her tireless work ethic and her unwillingness to back down until she achieves her goals. Even in the testosterone-heavy world of mixed martial arts, Brittney has managed to carve out a spot for herself as a key element of the UFC brand. “I think that women are a breath of fresh air, and I know that everyone agrees with that,” said Brittney. “It’s nice, what we do. We’re treated amazing. So for anyone that’s interested in getting into this line of work, this is such a fun job.”

No matter what the future holds, Brittney’s hard work has already paid off in spades. As one of the most beloved Octagon Girls, she’s all but guaranteed to be involved with UFC for years to come—and whenever she decides to move on, she can fall back on her world-class résumé as a painter and visual artist.

“It’s just really great to see the reaction when people can finally understand that I’m not just a UFC ring girl, but also an artist,” said Brittney. “It’s my love, my passion, and I’ve been doing it for years.”

This article was written by Alexander Lee, an esports journalist, lifelong Nintendo fan, and proud cat dad. Follow him on Twitter @alexleewastaken, and check out more of his work on his website www.alexlee.work.